To get started please visit microbit.org and select the Let’s Code link from the website navigation bar. 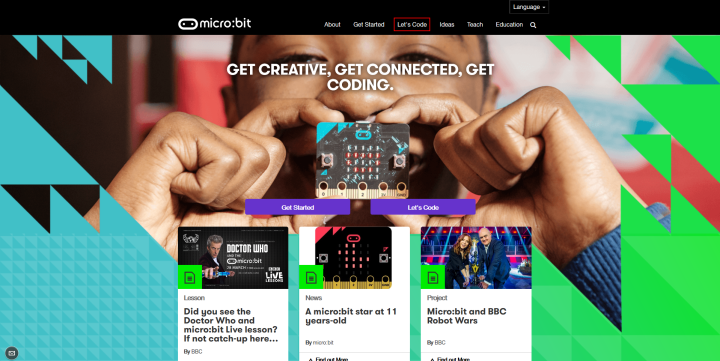 Once you have the JavaScript tab selected, you should enter the following code:

While still in the JavaScript tab, below the code entered in the previous step, you should enter the following code:

function is a block of code that you can use many times to do the same thing, they can also take in values known as parameters to use in the function.

Again while still in the JavaScript tab, below the code entered in the previous step, you should enter the following code:

input are things that happen, also known as events, when you do something with the micro:bit.

Finally while still in the JavaScript tab, below the code entered in the previous step, you should enter the following code:

Once the example is complete is should have started automatically, if not you can select the Play button near the “on-screen” micro:bit to start the example

You can set the compass by moving around the micro:bit logo on the “on-screen” micro:bit this will display the direction it is pointing in, for example S for South – you can turn the micro:bit in your hand to point in a particular direction do the same thing, you’ll need to calibrate it by waving it around in a figure-of-eight in the air until the micro:bit indicates this has completed. You can then press the A button to add a direction to a list which can be displayed at any time by pressing the B button which will display all the directions added – to clear the list at any time you just press the A+B buttons together.